To mark the centenary of the 1918 Spanish flu pandemic, Florence Nightingale Museum created an immersive exhibition which told the story of the ‘deadliest pandemic in history’ through the experiences of the people who lived through it. The exhibition was awarded ‘Temporary or Touring Exhibition of the Year’ at the 2019 Museum and Heritage Awards. Here you can find out more about Spanish flu and access some of the resources created for the exhibition.

The exhibition ran from September 2018 to January 2020

Learn more about the team behind the animation: https://viralanimation.org/

The Plague of the Spanish Lady

In the autumn of 1918, as the First World War approached its end, a far more deadly killer was sweeping the globe – the Spanish influenza.

Over the next 18 months the virus ravaged the globe, infecting an estimated 500 million, and killing between 50 and 100 million. In Britain 250,000 people died, a disproportionately high number of them young and healthy adults.

In the early months of the pandemic, wartime censorship in the UK, USA and Germany minimised reports on the seriousness of the outbreak in order to boost morale and prevent panic. However, detailed reports were emerging from neutral Spain, where King Alfonso XIII fell gravely ill, giving rise to the nickname ‘Spanish flu’.

The scale of the pandemic was so vast that public services were quickly put under huge strain at a time when many resources were already taken up by the war effort. Hospitals, mortuaries and undertakers could not cope with the overwhelming numbers of patients and victims. There was also a profound impact on normal daily life, even for the healthy. In many countries, cities imposed curfews and banned public gatherings, including funerals. Schools, churches and theatres were closed.

However, despite the devastating effect on the lives of those who lived through it, a century on, Spanish flu has largely faded from our collective consciousness. This exhibition explores the experiences of those who lived and died and asks the question: could a flu pandemic of this scale happen again?

The Spanish flu virus was an H1N1 strain, similar to, but far more deadly than the one that caused the Swine flu pandemic in 2009. No-one knows where it began but scientists and historians have suggested that the virus started at an army camp, like Camp Funston in Kansas, USA, or the Allied field hospital in Étaples, Northern France.

The global nature of the First World War directly contributed to the rapid worldwide spread of Spanish flu. The geographical reach of the virus was intensified by the mass movement of people and livestock, as fighting came to an end and troops began to go home. Soldiers worried about bringing the flu with them to infect their families. Tragically some arrived home to find their communities devastated and entire families wiped out.

Some countries attempted to enforce quarantines in an effort to keep the virus out. Watching the crisis develop from afar Australia had time to implement a nation-wide maritime quarantine. However, even this was only able to keep the virus at bay for three months, with the first reported cases in Melbourne appearing in January 1919.

In America the city of Philadelphia was particularly badly hit, with the Health Bureau recording 75,000 cases during September 1918 alone. Hospitals were quickly overwhelmed by the numbers of patients needing care and soon the medical staff began falling sick too, including forty nurses working at the Philadelphia Hospital. Public services collapsed under the strain, by mid-October the city’s morgue housed 500 bodies awaiting burial. Horse drawn wagons patrolled the streets looking for the abandoned dead.

It was a similar story in Britain. By the end of October some 1,400 officers from London’s Metropolitan Police Force were off sick and there were reports that 61 people had collapsed in the city’s streets in one 48 hour period.

Many cities, including San Francisco and Seattle made the wearing of face masks compulsory. These gauze masks became an iconic symbol of the pandemic but in reality were little use in stopping the spread of the virus.

What made Spanish flu so terrifying was both the shocking symptoms many patients suffered, and the speed with which it progressed- those healthy at breakfast could be dead by evening.

Good general nursing was one of the only things that helped. The virus itself could be deadly but often Spanish flu victims actually died of complications such as pneumonia. Keeping patients’ fevers down, and ensuring they had enough fluids and food, was essential for them to have any chance of survival.

One of the most distinctive symptoms was heliotrope cyanosis, a dark blue or purple flush that spread over the body, caused by a lack of oxygen as the victim’s lungs filled with fluid and pus. If a patient began to show signs of cyanosis it often meant death was close. Many victims essentially drowned in their own bodily fluids.

Patients could also suffer from frightening hallucinations during the infection due to their high fevers. The writer Vera Brittain recalled being ‘chased up and down the hut by a stark naked six-foot-four New Zealander in the fighting stage of delirium’ while working as a volunteer nurse. Explosive nosebleeds were also common, however, although distressing, these were often a positive sign indicating that the high fever had broken and the worst was over.

The effects of Spanish flu could continue long after the patient had apparently recovered from the infection. Some patients lost hair, fingernails and skin, or developed heart or lung complications, while others suffered severe depression.

In the months and years following the pandemic a large number of both murders and suicides were attributed to the Spanish flu in contemporary newspapers. In one such incident a baker from Norfolk, Leonard Sitch, killed his wife and two children before committing suicide, a week after being bedridden by the virus in November 1918.

With many doctors and professional and volunteer nurses away from home, serving on the Western Front, hospitals struggled to cope with the sudden influx of patients. Nurses working in the community often had few supplies at their disposal. One recalled having her bag contain just a thermometer, a nail brush, alcohol, creosol, a feeding cup and gauze. Yet nurses saved countless lives with their dedication. In Alabama, USA, a public health nurse is recorded as caring for 139 patients over three days, with just one fatality.

Nurses cared for their patients at great personal risk, and Spanish flu was the leading cause of death for military nurses during the First World War.

One such tragic case was that of British VAD nurse Phyllis Burn who worked caring for injured soldiers who had returned home for medical treatment. In October 1918 Phyllis became ill with a headache and chills. Recognising the symptoms and wanting to avoid infecting her mother and sister she immediately arranged to move away from the family home in Twickenham. Phyllis died two days later, aged just 20 years old, and is buried in a local cemetery.

“It was very serious among us nurses as well as in the wards & depts. Our matron had us nursed in the [nurses’] home and our “Home Sisters” could only manage to look in on us to give us our medicines. Many of us not as ill as others tried to look after ourselves & help with the really very ill nurses. Many of my friends died and their names will be found on the memorial planks of our Guy’s Hospital Chapel.”

The strain the pandemic placed on hospitals and medical professionals meant that the majority of Spanish flu patients were cared for at home, with overworked doctors making occasional visits. Nursing duties often fell to family members rather than to trained nurses.

“After many hours the Doctor came, and saw us, examined us all, and told my Father that he did not give much hope for us. Dad said he decided to do something on his own, and started giving us each hot milk and Brandy, and as we used enamel plates those days for us children Dad heated them in the oven until real hot wrapped them in towels and laid them on each of our chests and our backs in turn. He repeated the hot drinks of milk and brandy also hot enamel plates all through that night and early morning.”

Whole families could fall sick with the virus and be too ill and weak to nurse themselves or their relatives. Neighbours often showed immense bravery in taking care of others within their communities by nursing or providing food and comfort to the sick.

The overwhelming numbers of deaths meant that families often struggled to find coffins or gravediggers to bury their loved ones. Often bodies would remain at home for several weeks and families would have to resort to makeshift efforts to prevent decomposition. A young girl from Sunderland recalled after the death of her five-year-old sister;

In the absence of any proven knowledge about how to treat this virus and in the face of soaring mortality rates, many people were willing to try anything to protect themselves and their families. Traditional and old folk remedies were used, along with commercially advertised ‘cures’, produced by chemists who were quick to see a money-making opportunity.

There was a commonly-held belief in the curative powers of using spirits, particularly whisky, and everyday foodstuffs such as Bovril, Oxo and Horlicks were marketed to customers as ‘fortifying’ for those sick with flu.

Some remedies involved surprising ingredients. These included eating sugar lumps soaked in kerosene, gargling with a mixture containing creosote, and injecting the poison strychnine, all of which probably did more harm than good.

Great emphasis was placed on the importance of sanitising anything which might have come into contact with influenza. Public buildings and transport were fumigated regularly. In one Cumbrian town the Medical Officer arranged for a free supply of ‘disinfectant mixture’ for residents, whilst the floor of libraries and post offices in Brighton were cleaned using formalin every morning.

In New Zealand this craze for disinfecting stretched to the people themselves. Large inhalation chambers were built, where you could go to breathe in a concoction of zinc sulphate in the hope that this would help disinfect the lungs and relieve inflammation. 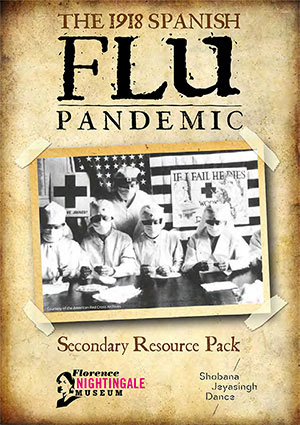 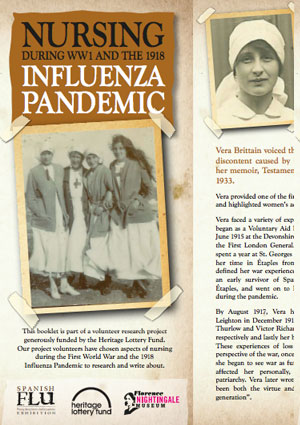 In 1918 the deadliest influenza pandemic in history swept the globe, killing 50-100 million people worldwide. This animation created for Florence Nightingale’s 2018 exhibition Spanish Flu: Nursing During History’s Deadliest Pandemic looks at the pandemic through the experiences of Dr Basil Hood and his nursing staff at St Marylebone Infirmary in London.

Could we experience a similarly deadly pandemic today? This oral history film created for Florence Nightingale Museum’s 2018 Spanish Flu exhibition, looks at the contemporary threat posed by influenza and how healthcare professionals and scientists are working together to protect us.

The Florence Nightingale Museum Youth Panel wanted to put a spotlight the Spanish flu pandemic and raise awareness of ways we can avoid another outbreak today. Facilitated over a full day with Chocolate Films, the young people had creative control of this film from pre-production to post-production.