Welcome to the Florence Nightingale Museum

We’re delighted to be re-opening our doors in this, Florence Nightingale’s bicentenary year, and we look forward to welcoming you during 2020 which the World Health Organisation has named the Year of the Nurse & Midwife in her honour – with good reason! We’ve all heard of the new Nightingale Hospitals, but did you know that she was the instigator of Wash Your Hands, that she founded modern nursing and campaigned for better sanitation to improve public health?

So do book your ticket now to come and visit us, or if you’re not able to visit right away please donate now so we can keep Nightingale’s legacy alive. The Museum had been planning for a year of celebrations in 2020, and instead we are now struggling to survive.

We are planning to open until November at least, so please do support us as every penny you spend on your admission ticket or in our shop helps us save Nightingale’s legacy for future generations. After that, who knows…. And of course, on a positive note, if the demand is there we’ll open for more days each week!

Meanwhile, you might think you know all there is to know about Nightingale. After all, everyone knows Florence Nightingale as the world’s most famous nurse. But were you aware she was a nurse for only a few years of her life, during the Crimean War? During her early years she had to struggle against her parents’ wishes to become a nurse, but when she came back from the war she was seriously ill. She had achieved iconic status by this time, but disliked the fame and instead used her influence behind the scenes to campaign tirelessly for better healthcare for all, despite her own ill health. As the founder of modern nursing, a leader and a trailblazer she is still an inspiration to people around the world today.

During 2020 we will be celebrating Nightingale’s bicentenary with a new exhibition, “Florence Nightingale in 200 Objects, People & Places”, demonstrating what influenced her on her own journey as an icon, leader and pioneer so visit now and be one of the first to see it!

You can see the lamp she carried in the Crimea, her pet owl Athena and her (much used!) writing desk among many other objects.

The Museum is at the south end of Westminster Bridge, in the grounds of St Thomas’ Hospital, close to both Waterloo and Westminster stations. Getting here is easy as a number of cycle superhighways pass close by and it’s a lovely walk along the Thames to our front door! 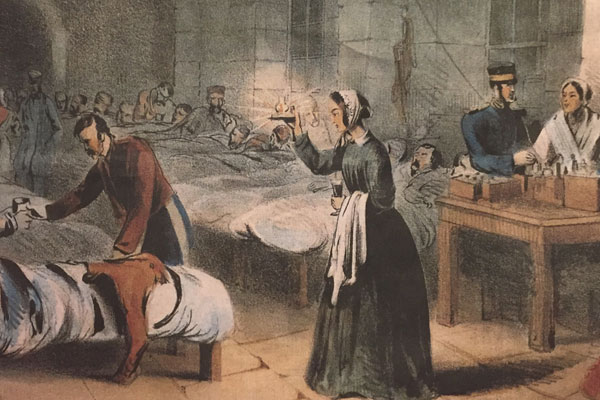 A year to remember

Florence Nightingale was born in 1820 so throughout her bicentenary year in 2020 there will be a series of events to celebrate, both here at the museum and with our partners internationally.

What’s on
at Florence Nightingale Museum

We run a lively programme of special events here at the museum.