Lynn registered as an adult nurse in 1982 from Glasgow Royal Infirmary, Eastern College of Nursing, with her first Staff Nurse post in an Orthopaedic ward within the hospital.

From early in her nursing career, Lynn knew she wanted work in community nursing, and in 1984 became a community Staff Nurse in Hamilton. This led Lynn to graduate with a certificate in District Nursing and return to her roots as a DN in Hamilton.

As well as District Nursing, Lynn had a keen interest in education initially becoming a mentor to student nurses and returning to education herself, graduating with a BSc Health Studies in 1995 followed by a Nurse Prescribing Qualification.

In 2007 Lynn took up post as a Practice Education Facilitator (PEF) and continued in this role until her retirement in 2022.

Lynn retained a keen interest all things relating to District Nursing, especially the development of staff via post registration/ SPQ or local Band 6 development and was instrumental in the introduction of the Community Nursing Development Framework (CNDF) an initiative to develop Band 5 community nurses.

Lynn has been involved in NHS Education for Scotland work streams including Flying Start, District Nursing CPD resource and preceptorship resource, has an interest in the Turas platform and was our Equality and Diversity Champion.

Away from work Lynn is married with a son and spends weekend time with her elderly mum who is understandably very proud of her daughter’s achievements. Lynn enjoys time with friends, gardening, reading, knitting kilted dolls and says her guilty pleasures are Equi’s rum and raisin ice cream and milk shakes.

During her time in the PEF team Lynn has been a supportive role model inducting a large number of new colleagues providing support, guidance, patience and sound counsel to lead us in our role.

Lynn will be sorely missed but we all wish her a long, healthy and happy retirement with time to enjoy all the things she loves. 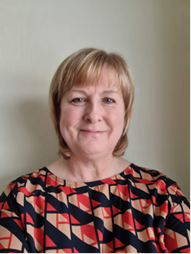