Kathy began her Nursing career in 1974 by commencing Pre-Registration Orthopaedic Nurse training at Winford Orthopaedic Hospital deep in the countryside on the outskirts of South Bristol. She joined a Pre-Training School (P.T.S) of other young women, all aged 17, straight from school. They lived in the Nurses Home in the hospital grounds. This formative experience of living, working and studying together over 2 years, formed strong bonds, and Kathy remains in touch with the majority of her lovely PTS group.

Kathy studied to become a Registered Nurse (S.R.N) at Frenchay Hospital in East Bristol from 1976-79. Again her “Set” lived in Nurses Homes on site. When Kathy undertook a 3 month Psychiatric secondment to Glenside Hospital in her second year, she made so many friends with the Psychiatric Nursing students she lived with, that she remained living there until the end of the training. During her final year her beloved Mum was admitted with Breast Cancer to the surgical ward where Kathy was on placement. The authoritative Ward Sister  had arranged for her Mum to be admitted to that ward, and allowed Kathy to remain on placement there (though, obviously, not nursing her Mum). This sense of the nursing profession taking care of its own. made a very strong positive impression on Kathy.

She qualified as an SRN in 1979 and worked as a Staff Nurse at Frenchay for 2 years. She married the gorgeous Bela in 1980. Then in 1981 she seized the opportunity to make good use of her Orthopaedic qualification and became a junior Staff Nurse on the Accident and Emergency Trauma ward at the Bristol Royal Infirmary. She loved it there both the work the city centre location, really buzzy. Eventually she became Sister-in-Charge of the same ward in 1985. She drew an amazing team around her, and remains in touch with most of them. As well as working together, they also spent the majority of their time off together, socialising, organising Bed Pushes and Demos. She was a Union Steward, first for the RCN and then for the NUPE.

In 1989 Kathy & Bela adopted Annie, followed by Sam in 1993. These adoptions were in the days before Adoption Leave, so Kathy took 3 months unpaid leave for both adoptions, before returning to work. In 1997 the opportunity arose for her to work with Nursing Students on placement on behalf of the University of the West of England, where students were studying for degrees in Adult Nursing. She became a Visiting Lecturer at UW and remained there for 20 years. Kathy was inspired by the commitment of the Nursing Students.

From 2014 to 2016 she was also a Clinical Advisor for the Care Quality Commission, and inspected hospitals in London. She was delighted when, in 2016 the Royal College of Nursing used a photo of Kathy and a colleague on a Demo in 1985 as the banner photo to celebrate the RCN Centenary. This photo was used in all he promotional material and even made into a whole room exhibit at RCN HQ, which Kathy was invited to  view.

In her final year working she was pleased to be invited to attend the first International Nurses’ Day service to be held in Bristol at the Cathedral. A poem read at the service included these words about being a nurse:

“You will see people at their worst and at their best. You will never cease to be amazed at people’s capacity for love, courage and endurance. You will see life begin and end. You will know what it is to be human and to be humane.”

She retired aged 60 in 2017 in order to travel with Bela to Australia and New Zealand and make plans for further travel. She needed more free time to attend her two Zumba classes a week, sing in her acapella choir, and attend her Women’s Book Group. 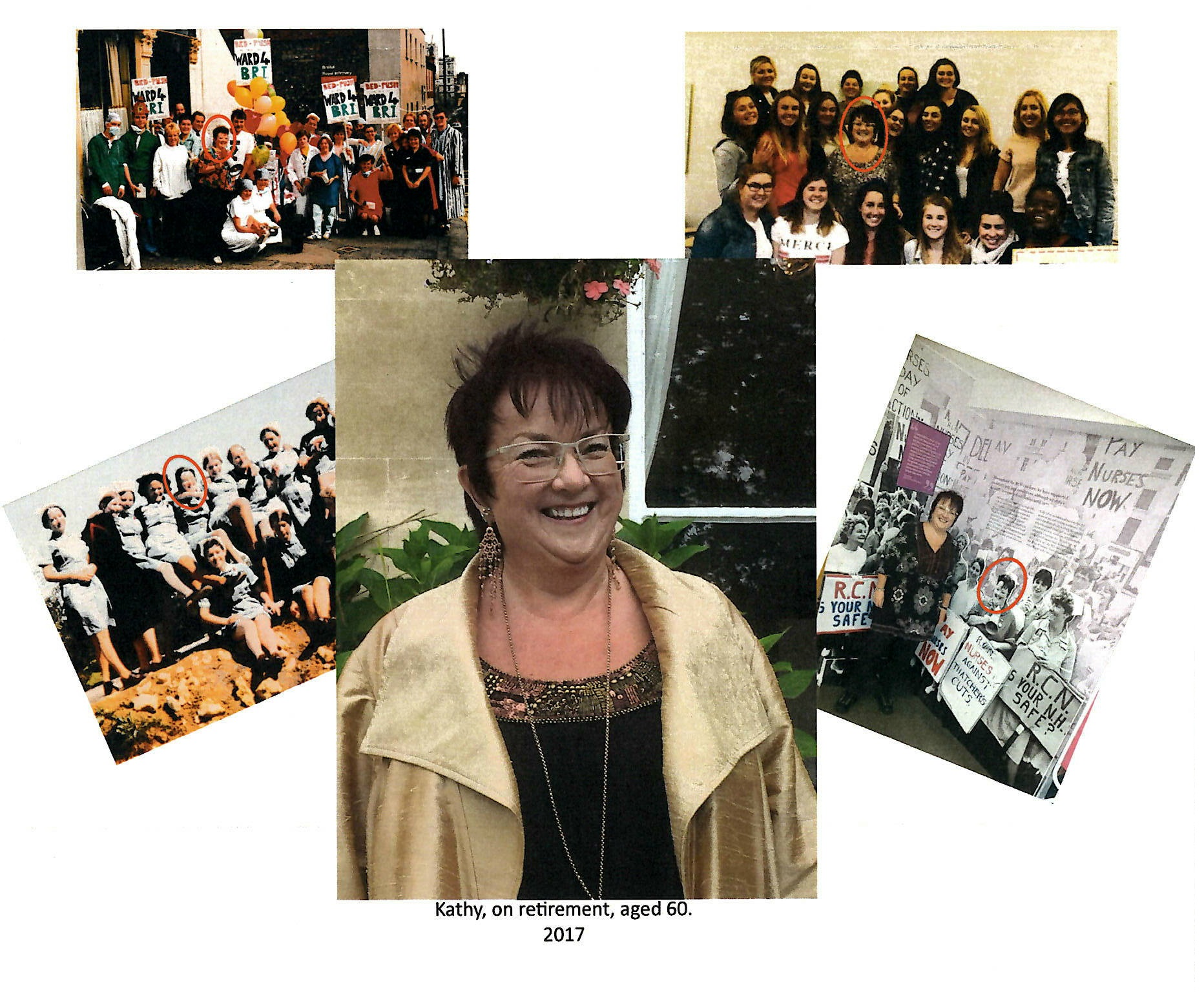