A virtual tour in Derby

Florence Nightingale is back in Derby in 2020 as one of the ‘stars’ of a new virtual tour – 200 years after her birth.

The nursing pioneer spent her early years in Derbyshire, where her family owned a large estate, Lea Hurst, and she played a leading role in shaping the area’s biggest hospital of its day, the Derby Royal Infirmary, which reopened in 1869 with a new wing named after her.

For 2020, as part of celebrations of the 200th anniversary of her birth, visitors to Derby can discover more about her time in the county and the influence it had on her, thanks to an innovative new city centre trail.

She is one of the ‘stars’ of a new augmented reality walk of fame, Made in Derby, which superimposes a computer-generated image of 10 famous names at locations across Derby city centre, via a smart-phone. 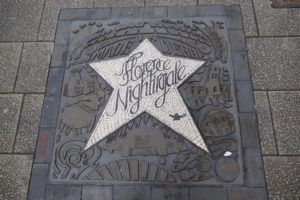