A beautiful new stained glass window will be dedicated in Romsey Abbey on 17 May, 2020 to commemorate the calling by God of Florence Nightingale. Nightingale wrote in her diary that, in 1837, approaching her seventeenth birthday “…God spoke to me and called me to His service” and this window celebrates that event.  The calling happened in the grounds of her home at Embley Park near Romsey, Hampshire, as she was seated under a cedar tree with a distinctive split trunk which is still there to this day.

Sophie Hacker has re-imagined this significant moment and uses biblical text, flowers, birds, buildings and other symbols to draw attention to important chapters in Nightingale’s life.

The buildings in the window feature the Duomo in Florence where Nightingale was born, the distinctive outline of Scutari Barracks where she was sent by the British Government in 1854, St Thomas’ Hospital in London and the Royal Hampshire Hospital in Winchester, not far from Romsey, both of which feature Nightingale’s distinctive pavilion-style wards.

Athena, the owlet from Athens which Nightingale kept as a much-loved pet at Embley Park, is also depicted.  Athena is now housed at the Florence Nightingale Museum. The bird on the left is a nightingale and is clearly shown singing heartily.  Nightingale particularly loved the sound of birdsong, and heard the praises of God in every song.   Swallows at the top symbolise resurrection.

Flowers in the foreground include primroses (for February, the month Nightingale received her call) lily-of the-valley (for May, the month she was born) and snowdrops (brought back from the Crimea by soldiers).

The text in the sky is a paraphrased quote from Jesus, whilst Nightingale’s response, in her own handwriting at the base of the window, are words taken from the book of Isiah, both of which are Nightingale’s favourite biblical texts.

Sophie Hacker specialises in Church Art, including stained glass windows, textiles, sculpture and silver. Her studio is in Winchester where she designed and painted the window.  The glass was cut and etched in Wells, Somerset.  The leading will be done in Salisbury. 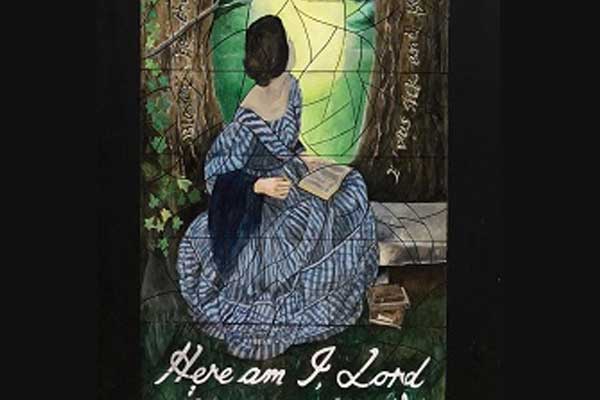