Postponed.  A new date will be advised at a later date.

To celebrate the International Year of the Nurse and Midwife – as well as the 200th anniversary of the birth of Florence Nightingale – The Queen’s Nursing Institute will be holding a celebratory event, the QNI Festival of Community Nursing, on Saturday 20th June in Liverpool. Liverpool has been chosen because it is the birthplace of district nursing and the QNI has many historic ties with the city.

The free event will be open to the public and the QNI will be offering a range of educational activities including an exhibition of vintage nursing uniforms, photographs and artefacts, talks on nursing subjects past and present, film screenings, guest appearances by local celebrities, and a walking tour of historic nursing sites including the Nightingale Memorial, led by a local guide.

Florence Nightingale worked closely with the philanthropist William Rathbone VI, who was responsible for creating the first professional District Nursing service in Liverpool in 1859. Rathbone and Nightingale were instrumental in founding the Liverpool Training School and Home for Nurses, which opened in 1862 next to the Liverpool Royal Infirmary. It was their vision that then led to the establishment of The Queen’s Nursing Institute in 1887. The QNI operated the William Rathbone Staff College in Liverpool until the 1970s.

The event will be held in Liverpool Town Hall, a magnificent listed building dating from 1749.

It is not necessary to book in advance but it is helpful for the organisers. 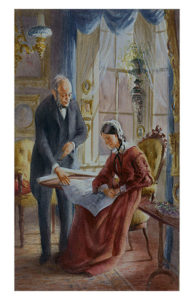